“Under attack from a difficult situation, Mr. Jaques handled my request with immediate urgency and razor sharp attention. He quickly grasped the situation at hand and provided quick effective solutions with the utmost sincerity and professionalism. I would not hesitate to hire him again.” – Mr. Jaques is Wonderful!

“A malicious post was made about my wife on face book. This kind of nastiness is extremely upsetting and you feel powerless to do anything about it. I got intouch with Bruce and he called me on a Saturday evening after reviewing the face book post.l Although there was nothing that could be done through the court system his calming manner and sound advice was very reassuring. We will be using Bruce in the future to send some correspondence to the woman who put the post on Facebook. If anyone came up to me with a similar problem I wouldn’t hesitate to recommend Bruce to them.” – A Proper Gent

“I hired Bruce to write some letters for my small business to a customer who was posting defamatory and threatening material about my employees and company online. Bruce was very attentive to my needs and listened to what I wanted to do and gave me the best option available to contact this customer and get them to remove their defamatory postings. I would highly recommend Bruce to any other small businesses or individuals who are having problems of this nature.” – Shane M

“Bruce is just AWESOME!! He is a REAL PERSON, he’ll tell you what’s up, and doesn’t lay out any BS. I’ve had more than my share of attorneys during my short life, so TRUST ME when I say, Bruce is the BEST ATTORNEY out there!! If you ever have the pleasure of speaking with him, YOU TOO will feel very confident in knowing that he does truely have YOUR BACK and WILL FIGHT FOR YOU!! So happy HE IS MY ATTORNEY!! I’m one of the LUCKY ONES!!” – Alice C

“I highly recommend Bruce Jaques, Jr., Esq. I consulted him on defamation (libel) issues that came to me in a long “Cease & Desist Letter.” After we spoke, Bruce offered to intervene to defend me and potentially do away with the claims. He did so, and we heard nothing else from the anticipated plaintiffs. Bruce accomplished this for a very reasonable fee. He is a first-class lawyer.” – Zaki 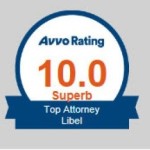 Review all of Mr. Jaques’ Client Ratings on Avvo

“We retained attorney Bruce Jaques to assist us with a delicate and very serious civil matter. There were many issues involved and our opponents were big names and well-established. Over a period of months, Bruce negotiated an excellent solution and our lives are much better due to his efforts. Bruce made the problem go away and his legal fees were reasonable. We highly recommend him.” – Gina and Jim

“Bruce has been an invaluable support and resource during a difficult and unexpected conflict that burdened our family out of the blue. He has thoughtfully reviewed all of our information, genuinely listened to our needs and goals, and responded quickly to our questions and input. We are thankful and confident that we will be well protected as events related to our situation unfold.” – Sarah

“I was recently sued in San Diego by a large corporation. The plaintiff alleged libel, slander, and false light. The claims emanated from an Internet posting I made about the company. To defend me against this lawsuit, I checked out several lawyers and then retained defamation attorney Bruce Jaques, Jr.

I was lucky to have selected Mr. Jaques. He is very knowledgeable about the complexities of the law of defamation. He immediately grasped the nuances of the case and my defenses. Mr. Jaques then attacked the plaintiff’s complaint in a careful, crafty way. Among other things, he promptly forced them to completely drop the cause of action for false light.

Mr. Jaques took an aggressive approach to my defense. He filed a special “anti-SLAPP” motion and immediately engaged the company that sued me. In just a few months – as opposed to 12 to 18 months, which is the norm, the libel and slander claims against me were dismissed for all time. I paid the plaintiff nothing.

My wife and I can now proceed with our jobs and enjoy our family without fear of accusations of libel, slander, or false light. We are also very relieved, as we are no longer concerned with the hundreds of thousands of dollars in money damages the plaintiff sought.

We are very grateful to Mr. Jaques for his knowledge of this area of law and his deft handling of the case.” – Z. Nortz

“Bruce Jaques is a very smart, aggressive lawyer. When I broke off from a flood company I had started, I felt I was justified in switching all the phone lines to my new, competitive company. I was shortly sued for unfair competition by my former company. They sought a Temporary Restraining Order and a Preliminary Injunction to regain the phone lines and shut me down. For us it was a “bet-the-company” case. Over a frenzied period of days and nights, Mr. Jaques prepared a brilliant written rebuttal, with supporting evidence, to the legal theories and arguments of my former company’s astute, aggressive law firm. Bruce then argued our position admirably in court. The Judge denied the TRO and dismissed any prospect of a Preliminary Injunction. I legally kept all the phone lines I’d switched from my old company. My wife and I owe our now-thriving and growing company to the energy, intelligence and experience attorney Jaques applied to this potentially devastating situation. As I told Bruce, his work was magic. I endorse him 150%.” –  Steve, CEO, Carlsbad, CA

“Mr. Jaques is a very competent, attentive attorney. He was quick to respond to any questions I had or on the status of my case. I highly recommend him! In my experience most attorney’s will take your money and then will be hard to get a hold of after that. Mr. Jaques is exactly the opposite of that, I was very happy with my service.” – Gregg

“I hired Bruce to write some letters for my small business to a customer who was posting defamatory and threatening material about my employees and company online. Bruce was very attentive to my needs and listened to what I wanted to do and gave me the best option available to contact this customer and get them to remove their defamatory postings. I would highly recommend Bruce to any other small businesses or individuals who are having problems of this nature.” – Shane

“Bruce is an excellent attorney. Personable, professional, and very competent. We would litigate as co-counsel with Bruce any day.” –  James, Attorney, Del Mar, CA

“Attorney Jaques is the best lawyer I have ever hired. He defends us aggressively and sues when we have to, but he has a poised, intuitive approach to negotiations and settlement. Mr. Jaques is bright, psychologically attuned to the parties in a case, as well the judge (his experience really helps that way), and quite creative. Finally, while he costs a little more, he bills reasonably. All this rarely comes in one package. Mr. Jaques has my highest recommendation.” –  Sandy, small business owner, San Diego, CA

We provide personalized attention from the moment we take your case until the best possible results are achieved. We strive to be accessible to our clients and are easy to reach by phone. If you need to leave a message, we aim to return your call within two hours. Call us at 760-295-1311 or schedule a confidential consultation with an attorney.